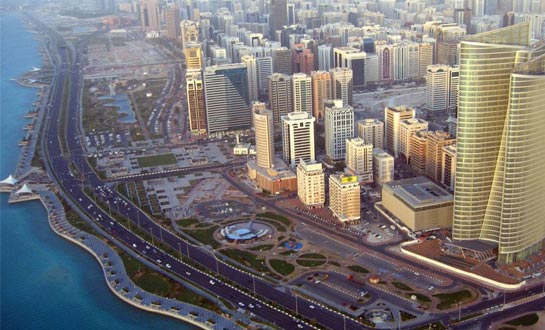 The City of Abu Dhabi is the capital of the United Arab Emirates.

The Emirate of Abu Dhabi(AUH) borders Saudi Arabia to the west and south, Dubai to the north, and Oman to the east. It has some 600 kilometers of Arabian Gulf coastline and over 200 natural islands along its northern boundary. Abu Dhabi comprises almost 87% of the UAE’s total land area.

Abu Dhabi is regarded as window to the whole Middle Eastern region due to its strategic location. The Emirate is positioned as a preferred location for international firms looking to expand into the growth markets of MENA and Asia. For administrative purposes, the Emirate is divided into three regions.

The First region encompasses the City of Abu Dhabi, which is both the capital of emirate and the Federal Capital. Abu Dhabi’s second region, the Eastern Region, has Al Ain city as its capital; it is relatively fertile and rich in greenery, with plenty of farms, public parks and important archaeological sites.

In addition to the three mainland regions of Abu Dhabi there are a number of important islands within emirate, including Da, Mubarraz, Zirku and Arzanah, where the main offshore oil fields are located. Closer in shoure are Dalma, Sir Bani Yas, Merawah, Abu al- Abydah and Saadiyat, together with many others.

Key facts of Abu Dhabi at a glance

Full repatriation of profit and capital allowed in the emirate’s Free Zones.